A Horse, a Chicken, and a Harley

A Horse, a Chicken, and a Harley:
On the farm lived a chicken and a horse, both of whom loved to play together.

One day the two were playing when the horse fell into a bog and began to sink.

Scared for his life, the horse whinnied for the chicken to go get the farmer for help!

Off the chicken run, back to the farm. Arriving at the farm, he searched and searched for the farmer, but to no avail, for he had gone to town with the only tractor.

The chicken was running about when he noticed the farmer’s new Harley.

When he discovered the keys in the ignition, the chicken took off with a length of rope, trying to save his friend’s life. 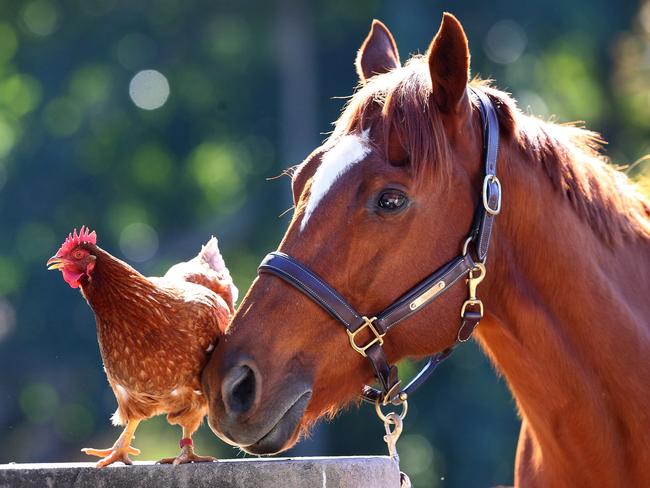 Back at the swamp, the horse was shocked, but pleased, to see the chicken appear on the shining Harley, and he managed to grab the loop of rope given to him by the chicken.

After connecting the other end to the rear bumper of the farmer’s bike, the chicken moved steadily ahead and saved the horse with the help of the strong bike!

The chicken rode the Harley back to the farmhouse, happy and proud, and the farmer was none the wiser when he arrived.

A few weeks later, the chicken slipped into a mud pit and quickly began to sink as well, pleading with the horse to rescue his life!

The horse paused for a bit before walking over to straddle the huge puddle.

Looking beneath, he instructed the chicken to grasp his hangy-down item and hoist him out of the hole.

The chicken took a good hold of the horse, and the horse dragged him up and out, saving his life.

The moral of the story?? (yep, you betcha, there is a moral!)

‘When You’re Hung Like A Horse, You Don’t Need A Harley To Pick Up Chicks!